A friend and I recently set each other the challenge to send each other a photo every day. Before I go on, I should say my friend is a professional photographer so I was more than a little nervous to embark upon this exercise with him… and as you’ll see his photos are somewhat more polished than mine.As a planner I spend a lot of my time buried in wordy documents and articles (which as a book worm, I don’t mind), but as someone who studied History of Art, I love visual imagery and sometimes miss the days where I could spend hours on end mesmerized by Renaissance paintings and gasping at Gothic cathedrals. So, it’s been lovely to receive a little visual treat every day, and to allow myself the time to look out for them as my potential subjects for photographs.

You can say a lot without words

Sometimes a caption-less picture is enough to make you laugh without any explanation (One point to the art directors).

But words can make a picture much more meaningful

Without any explanation a picture can lack meaning (one point to the copywriters). I received a picture of a beautiful mill which without an explanation I wouldn’t have known was the Jordan’s cereal mill. Nice to know they actually have one.

It’s far harder to choose a picture than it is to choose words (one point to the art directors?). We use words everyday in texts and emails but rarely do we have to use pictures for a particular purpose.  Perhaps we ought to practice communicating in images more…

Looking properly takes effort – but the more you do it, the better you get

It’s hard to find things to take photos of when you know there will be an active viewer of the photo other than yourself.  But, I’ve found that the more pictures I have to take, the better I get at finding subjects. I’ve got daily inspiration too, from my friend who keeps me on my toes.

Seeing the world through someone else’s eyes changes your perspective

It’s refreshing to see the world through someone else’s eyes. I would never have thought to take the below photos, but there’s great beauty and pathos in them. Now if I look down as I’m walking, I properly look to see if I can spot anything surprising. I suppose that is what being a planner is about: looking at the world from the perspective of other people. It’s good to practice doing that on a daily basis rather than through the occasional focus group. 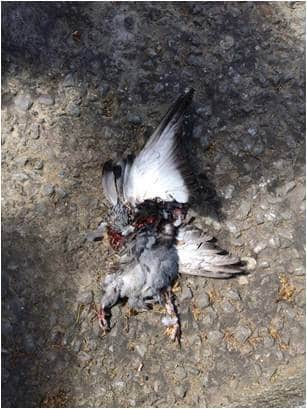 The difficulty of an open brief

The main difficulty in this challenge stems from having such a wide reaching remit. All we said to each other at the start was that we should take a picture everyday of anything we fancied and send it to each other. Apart from the lucky synchronicity of the yellow shoes/socks, we haven’t really led each other to take a picture of anything in particular. With some more constraints, I think it would have been a lot easier to find things to take pictures of.

Nonetheless, it’s been really fun so far and literally opened my eyes to the world around me. I would recommend it as something to do to anyone, especially anyone working in a creative industry – just (a word of friendly Planner advice), maybe write a brief first.