For those who love tech and music, this is nirvana. Sonic Pi is a free live coding synth that enables those with even an elementary knowledge of code to create music. Enjoy.

Jared Leto tours the Arctic to show the damage that climate change is having and he does it using YouTube’s 360 video tool.

Blackberry may stop making mobile phones if they continue to haemorrhage cash. They need to sell 10m phones a year to be profitable and the outlook isn’t good (in context Apple sold 61m iPhones in Q2 this year alone). But, Pepsi think they can make it work and are apparently working on an Android device.

The UK Government are putting up £4m in funding for video game startups to help them come up with the next GTA or Tomb Raider. Unsurprising, when you think that this 23-year-old guy who plays Minecraft for a living just dropped $4.5m on this Hollywood Hills pad.

Facebook’s play for mobile video is all coming together with their new video feed. While rival YouTube focuses on showing users content that they’re actively looking for, Facebook is taking a more organic approach to viewing and have stated that they “can totally imagine bringing it to other platforms such as smart TVs”.

Stat of the week – 40. The number of earthquakes detected everyday by the US Geological Survey’s sensors.

A company called Tiny Kittens in Canada has partnered with a local school to create a 3D printed wheelchair for a cat they rescued from the Canadian Wilderness. Cassidy is now walking on his own and is one of many pets who have benefitted from 3D printing.

Prepare yourself, it’s going to get emotional. 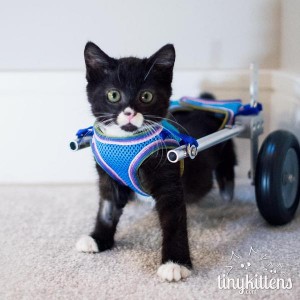