Last July, flush with just becoming a Barbican member, I was informed that we could get in early for the hottest ticket in town, Benedict Cumberbatch’ s Hamlet.

Now I am not a CumberBitch by any means, but I always enjoy a bit of Sherlock and think he is a pretty fine actor, a rising star of his generation etc., and nice to be able to get something you know everyone else wants.

So after a fair bit of online frustration I scored two seats in row T as a special night out for our Anniversary mid October.

The confirmation said tickets would come about three weeks before the performance. So by October 1st I was a little twitchy, and emailed the Barbican whining that the tickets hadn’t arrived.

They informed me that I had plenty of time – the performance was October 14th 2015. I could hear the giggling all the way from EC2.

One whole year later and we are drinking at the Martini Bar and using my membership card to get discount on overpriced delicious cocktails, getting anxious about whether there is time for a quick wee before settling in our seats. It will be two hours ‘til the next comfort break.

No photos, no crunching Minstrels. This was serious.

There has been criticism of the production, but I loved it. It is spectacular and gorgeous to look at.

The Art Direction is beautiful, the set stunning and majestic and believable, and the lighting incredible, doing what it should – painting with light and shadow.

I loved the soundtrack, the use of music and effects.

It strikes me suddenly that it has the crafting of a film (or a commercial) and maybe that is why it appeals to the more Soho amongst us, and less to pure theatregoers.  It is most definitely overcooked, and there are moments of pretention and pomposity, but it is all to the good. It looks EXPENSIVE.

And how was HE? Pretty damn good. Likeable and nimble, he drew us in as he sprang about the furniture, sulking and wallowing and hanging with his friends. His madness was delightful and he did some excellent jacket acting (there were a lot of wardrobe changes according to mood and levels of perceived insanity).

Ophelia got on my nerves, but that is not her fault, Horatio was completely credible and a good egg, the ghost was spooky and Claudius reeked of charm and badness.

My only criticism is how hot it was in the auditorium. It’s a long old show, and I must admit to resisting nodding off more than once. It was a blessed relief when Old Hamlet rose from the dead, bringing with him a distinct chill – I think this was temperature control for effect, or it could have just been me projecting.

Something cool happens at the end of the act 3, which I won’t reveal, which transforms the set for the second half and shows great use of SFX.

At only 50mins, Acts 4 and 5 are a hop and a skip, with battle drama, lots of barefoot running across rubble, and some efficient and handsome stage fighting.

And so ends the huge emotional ride.  There has been an awful lot of acting.

However exhausted and spent the audience feel, imagine what it is like for the cast. 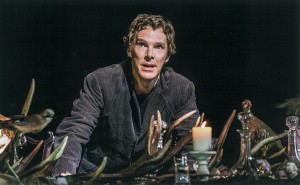 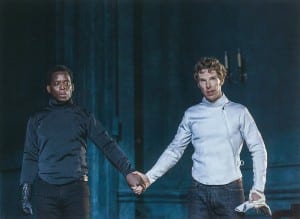