I cried this morning.

The good folk of Now were concerned when I got to the office, had been thinking of me when they heard the news, thought I might not make it to work. So although I have never considered myself an obsessive, I haven’t kept my love of Bowie to myself.

It started for me in 1972 watching the iconic TOTP performance.

Many people, today more than ever, say this performance changed their lives.

I have always thought that was a bit dramatic, but in retrospect, maybe it was true.

Were it not for Starman on the telly, who knows, I could have been someone else.

I would probably have made different friends, (now and then). Liked and disliked different things. Taken on other influences.

I had a pair of platforms that I called Bowie Boots but they were brown not pink. I never dyed or spiked my hair. My clothes were the same as my conservative peers.

I didn’t suddenly discover a talent, take up music or hairdressing, become particularly moody or extrovert.  I still chased boys.

But the seeds were sown for Something I Was Interested In that made me a tiny bit different from most of my fellow teens.

From then ‘til now I have forged certain Bowie shaped friendships, massively apparent today on Facebook.

Back to that Thursday night in August.

Fish fingers in front of TOTP.  My dad looking out for Pan’s People.

And suddenly, there was that mesmerizing performance. It looks so tame and friendly now but then it was so outrageous. This asexual beauty pointing at ME.

Next day sister suggested that we go and see the bloke with the blue guitar in concert, so off we trotted.

We queued for forty five minutes outside the Rainbow on a Saturday morning. Snapped up the cheapest tickets – 75p each.

And there we were, part of something soon-to-be-legendary.

I complained that the programme cost 20p, which was a terrible rip-off.

It was only a thin small reproduction of the Ziggy cover with some text.

Oh imagine if I still had it, instead of 4 vinyl versions, a few CDs and probably a couple of cassettes of the original album. 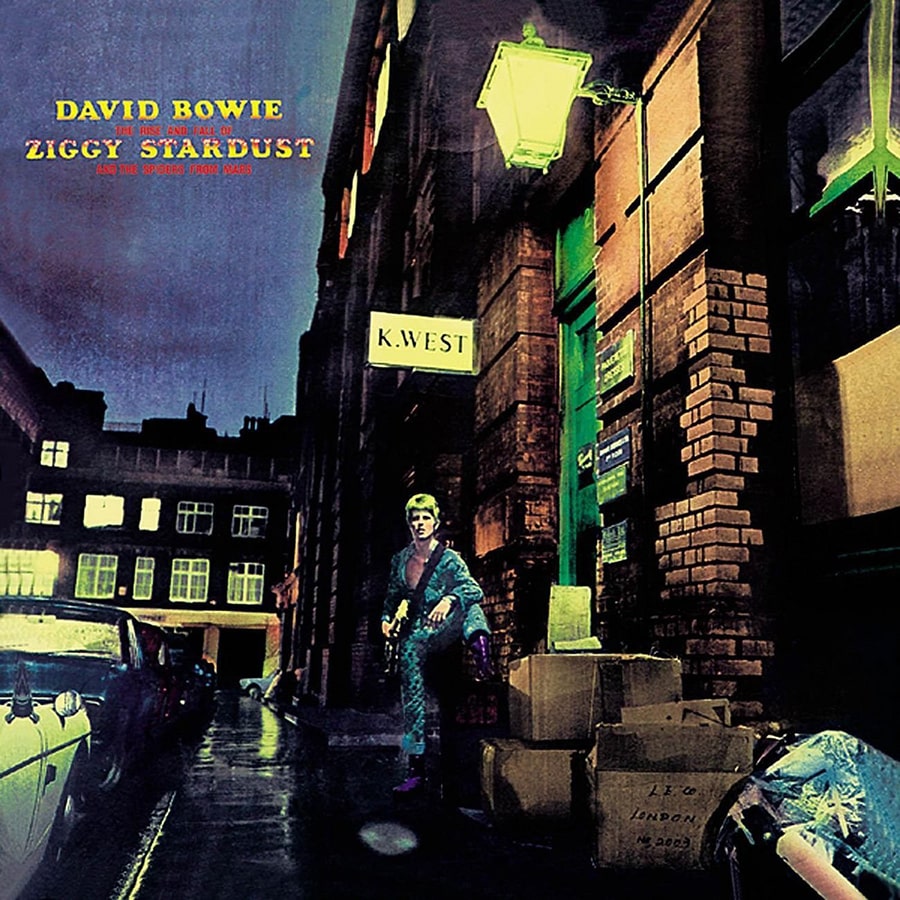 Roxy Music supported so another legend ticked off early.  They were pretty freaky!

Lindsay Kemp did the mime show, which prompted a fairly short lived passion for the silent dance.  (This was firmly put to bed by an Alexei Sayle sketch years later, but more of that in another blog.)

In fact, we were so impressed/besotted that we bought more tickets for the extra show ten days later. £1.50 this time. Roxy replaced by the JSD Band. No more Mime.

I spread the word and created fans. I got a cool status at school. David Cassidy passed me by.

We went to the Rainbow again at Christmas. It was still all so new – my bestie worried that her heavy metal brother would sneer at her. He didn’t. She got kudos…

Earls Court next.  Further afield. Luckily my NBF’s mum wanted to see the gig too (a super cool parent) so we got a lift. It was so huge, it took a second to focus on the stage. But I remember what I was wearing: a Laura Ashley maxi skirt, a white crossover top, and some yellow platform clogs.

The last time? Kilburn Gaumont State. This gig is rarely documented. I suspect it just got a little overshadowed by Hammersmith.

And lets talk about Hammersmith. Why weren’t we at the legendary killing of Ziggy Stardust? Why weren’t we holding back the tears during Rock ‘n’ Roll Suicide?

The only answer I can think of is that maybe just seeing David Bowie five times by the time I was thirteen and a half was considered enough. We could have run out of pocket money. Or perhaps Hammersmith was just too far away.

But there you go. I was part of history – right up until the historical bit.

Did David Bowie change my life?

Today I have to say yes it certainly did.

And what about those around me? My son Joe did his best to look interested in all the Bowie stories, the playing of albums, the documentaries, but it wasn’t his world. Until Bowie did this:

And then he listened and loved and now puts Hunky Dory up amongst his favourite albums.

He was entranced by Cracked Actor.

To my big sister Lesley, thanks for taking your 12 year old baby sister to her first and best ever gig (and there have been lots.)

And thank you David Jones.