When, in 1959, New York’s Museum of Modern Art sent an exhibition to eight European cities titled ‘The New American Painting’ featuring seventeen Abstract Expressionist artists the majority of the European audience simply didn’t know what to make of it. They were quite simply overwhelmed by works of these new ‘Abstract Expressionists’, including Mark Rothko and Jason Pollock, which were often enormous in scale and incredibly colourful.

I feel similarly overwhelmed walking around the Royal Academy’s current Abstract Expressionism exhibition, which is the first exhibition of some of the biggest works from the movement in Europe since 1959.

Before my visit I knew relatively little about Abstract Expressionism. I associated the movement with towering, paint-flicked canvases and knew that it revolutionised the art world when it emerged from New York in the aftermath of the war.

Wandering around the galleries and there certainly is no shortage of huge, paint-splattered works – I almost don’t know where to look in some of the rooms which seem crammed to the ceiling with enormous pieces.

In the Central Hall I find the instantly recognisable (and enormous) work of Rothko with its big blocks of red, purple and orange… 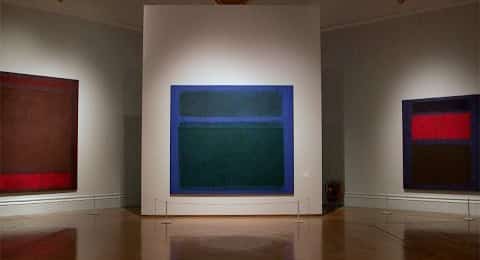 Yet as I wander into the other rooms my perception of Abstract Expressionism as being ‘all about scale, colour and big brush strokes’ is blown out of the water. There are over 150 works including sculpture, self-portraits and even a room themed around the idea of ‘darkness’.

All in all, Abstract Expressionism is a fabulous exhibition, full to bursting with art. Whilst some reviews have been critical of the ‘random’ mix of pieces, for me the diversity has opened my eyes to the complexity of this important artistic movement.

The show is on until 2 Jan.