For our recipe, access to bagels was no problem, as we happen to know the biggest bagel producers in the world – New York Bakery Co. You may find sourcing 70kg of bagels trickier, so divide the recipe to suit your means. On the other hand, finding somewhere to brew the beer (for free) was a bigger challenge. In the end, we partnered with a brilliant craft brewery in Herne Hill, called Canopy Beer Co.

Step 1
Acquire a brewing partner, or the relevant equipment. We cold-called 50 breweries all over the UK. This step requires a lot of time, patience and resilience.

Step 2
Chop and toast 800 bagels. Canopy’s brewers wanted small, toasted chunks of bagel for optimum brewing and toasty taste. NYB’s bakers kindly obliged. With a regular two-slot toaster this could take a while; a low heat oven will also work.

Step 3
Glossaries at the ready, this is where the techy language begins. Get down to your brewery. Steep the bagels and malts in a mash tun full of hot water. Leave for around one hour as the sugars release.

Step 4
Sparge and lauter. Ok, so that means draining the liquid from the bottom (lautering) while rinsing the sugars from the top (sparging). The liquid that comes out is called ‘wort’, which is an unfortunate name for something that smells and tastes very nice. Try it. It’s like a kids’ version of beer: malty, sugary, bagely, and currently alcohol-free.

Step 5
Bring to the boil for about an hour, adding the hops at around 50 mins. The boil does all sorts of clever things. The hops add flavour.

Step 6
Leave to ferment for 2 weeks. Another step that requires patience.

Step 7
The fermentation process gives you the perfect window to design your label. For this beer, we needed a collaboration between London brewer and New York baker. I chose to borrow from the quirky Canopy animal-head-human-body illustrations, and from the NYB Statue of Liberty logo. The result was a bagel-head-Lady-Liberty design. You wouldn’t want to meet her at night.

Step 8
Bottle and label. Canopy have a very cool machine that does this semi-automatically.

Step 9
Taste it. When I first tried our Bagel Beer I recognised a latent hint of the delicious ‘wort’ I’d first tried. Turns out, not all worts taste the same, and this specific malty, bagely flavour was particular to our Bagel Beer. Delicious.

Step 10
Serve chilled, alongside a bagel. 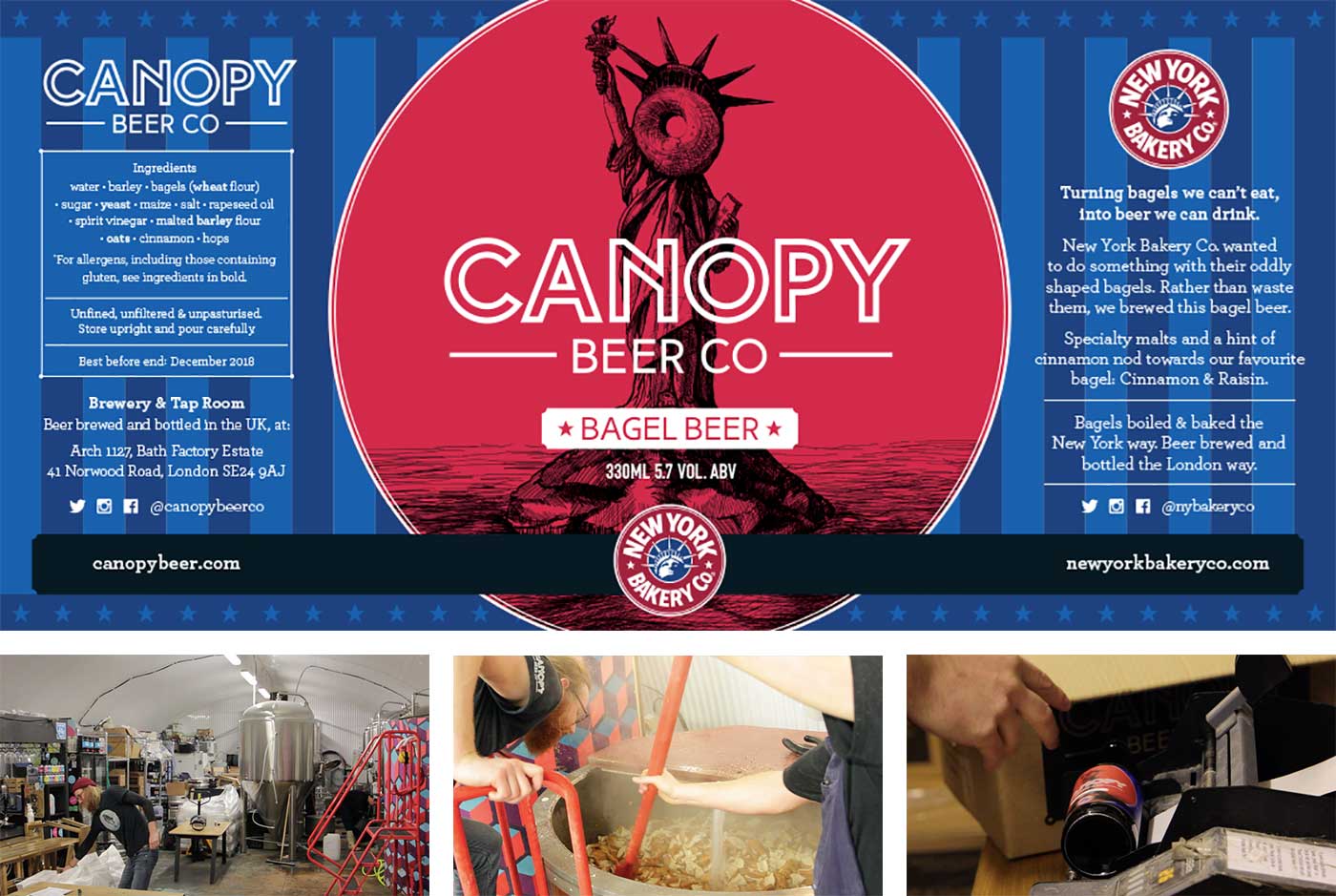