I was lucky enough to be invited to a Canvas 8 breakfast briefing with Dale Herigstad, designer and thought leader on the future of broadcast TV and how consumers interact with it. His contention is that dual-screening will evolve into a system where the additional content that we usually view on a tablet or phone will be layered on top of the main screen, providing an easier and more seamless experience for consumers. No more switching one’s gaze between one screen and another, as we explore social media, advertising and broadcast content, we’ll be using an augmented reality system more similar to the Heads Up Displays that fighter pilots use.

It sounds like sci-fi – hardly surprising from the man who was creative consultant to Minority Report but his contention is not just theory; he’s created a product called In-Air that does it, which has just gone into production and I suspect is a dead cert to become the next geek gadget of choice. First it detects what you’re watching, then it scrapes information from the internet that might be of interest (this could be real-time social engagement, or further information on topics, actors, or themes, etc) and then the really clever bit – it tidies it all up and presents it in layers that you can browse, not using a remote, but using gesture. 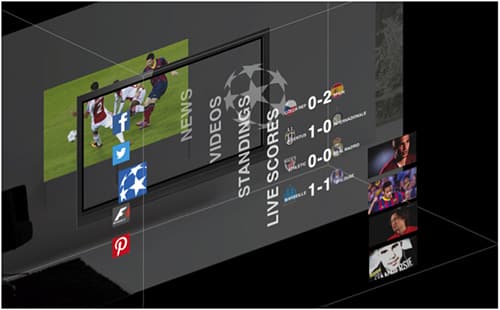 What I found fascinating about it is that it has the potential to influence decision-making in two almost diametrically opposing ways:

Consumers can bypass advertising to buy directly from their source of inspiration: if you’re watching Breakfast at Tiffany and fancy treating yourself or someone else, you can carry on watching and simultaneously ‘click to purchase’ – cutting out a whole layer of communication and vastly simplifying the consumer journey.

Conversely, it’s a system that advertisers could use to build more engaging and layered experiences – useful if you’re in a market with long and complex paths to purchase, or if you’re into trans-media storytelling.

It also poses interesting questions about the degree to which an essentially passive entertainment experience (TV) can become active and more demanding of our attention. Will it transform how we consume TV? Who knows. But it’s another exciting example of how technology could dramatically influence consumer decision-making, and as such, demands that advertising agencies and clients reconsider our understanding of what an idea is and what role advertising is best able to play for brands in this ever-changing tech landscape.